The writing (and revising) of The innovative school librarian

UK librarian Elizabeth Bentley recounts the process of writing The innovative school librarian and explores the benefits of collaboration.

I was one of a group of school librarians, initially composed of students on the MAEd course at Canterbury Christ Church, tutored by Sharon Markless, and later joined by Sarah Pavey. We continued to meet regularly with Sharon to discuss research and other issues related to school librarianship. Sharon Markless has been one of the most distinguished contributors to thinking on information literacy and school library evaluation since the beginning of the 1990s. While she was no longer teaching in the area, she wanted to remain in contact with practitioners, and so the group was born. One of our aims was to carry out action research within our schools, and different members of the group did publish papers based on their work in their schools.

After Sarah joined us, she was approached by Facet Press, the publishing arm of CILIP (cilip.org.uk), to consider writing a book. Rather than go it alone, she suggested that we should collaborate. The idea was for Sharon to guide and edit, but for the school librarians to do the actual research and writing. Collaboration was the aim, which I think comes naturally to librarians. We decided on a structure, built around the keywords of isolation, inspiration, integration and innovation, and divided the chapters amongst us, with two librarians working on each chapter. We spent a weekend at Sarah’s holiday house in Normandy, making detailed plans for what we would do. Unfortunately, after this stage, my partner Anne Felton had to drop out for personal reasons. I continued to work on my chapters on my own, albeit with increased input from Sharon. We also swapped chapters for redrafting.

The first section of The innovative school librarian concentrated on the school librarian, with a significant chapter on what professionalism consists of, and how it may exist in different forms. This is a discussion that perhaps is not sufficiently explored and has universal application for school librarians everywhere. The rest of the section looked at how others may perceive us and how we might bridge the gap between others’ perceptions and our own.

The second section looked at the need to define our specific school communities and how we positively work within them.

The third section explored the role of inspiration within our work, how we might become more integral to the work of the school, and how we might innovate within our practice.

An important element of the book was to incorporate vignettes of school librarian experience, based on either our own or those of members of the School Librarians’ Network (groups.io/g/SLN). This is an email list I started as a way of exploring the impact it might have on the working experience of school librarians in the UK, based on the model of the US LM_ Net, in the light of the relative isolation most of us suffer. These vignettes aimed to shed practical light on what was otherwise a theoretical book, rather a practical handbook.

Having started in the summer of 2007, we completed what we imagined was close to a final version the following summer. We arranged to meet as a group at Sue Shaper’s house to make the last edit. We naively imagined this would take no more than a day or two. It soon became apparent that it would take many more. All autumn, every weekend, we sat around a single computer and analysed every phrase and word to thrash out exactly how we wanted it to read. David Streatfield was kind enough to do the indexing and the book was finally delivered to Facet for copyediting. Published in May 2009, we threw a little party in London to launch it. Somewhat to our dismay, the published version still contained typos and layout problems, which was a lesson learned about how difficult it is to achieve the perfectly written book, in spite of all our efforts.

The book was well received, both in the UK and overseas, but it did not take very long for us to realise that in time the book would need revision and expansion. The role of information technology has grown and needed to be dealt with within the broader context of school library practice. Perhaps more importantly, we had not previously highlighted the need for evidence of the impact of our activities, particularly where we were introducing innovative ideas and practices. This needs to start from previously published evidence of such activities, whether to enable us to convince our managers of their potential for improvement, or to ensure that we are not misdirecting our precious time. Evidence of impact also needs to start with an evaluation of the current situation, so that we can later see what changes have taken place as a result of the new activity. 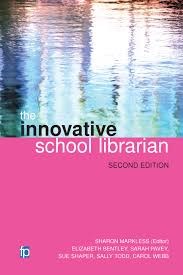 All this requires the commitment of time and energy, particularly challenging when times are difficult. Risk-taking is paradoxically easier when we feel secure. However, a professional attitude to our role demands that we take the need to innovate seriously. We hoped in writing The innovative school librarian to help more school librarians to take the risk of innovating.