Addressing reconciliation in a school setting

I have been a teacher librarian in a government primary school for many years. In this time, not only have I taught students but I have made decisions regarding cataloguing and shelving books in the school library as well. I also have a close friend, Christine, who is an Aboriginal Elder and social worker, and about sixteen years ago these two aspects of my life overlapped. This changed my understanding of the Dewey Decimal System, and my capacity to help reconciliation with the First Australians.

Decisions as a Librarian

When syllabus documents were changing, I had to find resources related to Comparative Religion. Before purchasing anything for the library I contacted different religions in order to select resources that the religions themselves approved, rather than just getting anything from a book seller.

Since Dreaming stories were specifically identified as needing to be addressed, I decided to consult Christine. The conversation we had was pivotal. She is truly a woman living successfully in two worlds: she has university qualifications and wide experience as a social worker, and at the same time, she is a law woman in her Aboriginal nation. With knowledge gained from Christine, I moved all the library's Dreaming stories from 398.2 (Folklore and Fairy Tales) to 298 (Religion).

Over the last several years, as Christine has gone on to complete her Doctorate and then to write books, she has invited me to be involved. Initially she used me as a sounding board in order to ensure that she was explaining theories and concepts in such a way that a person with no knowledge of a topic could understand the point she was making. Later on I helped to edit books before publication.

My learning curve was very steep. In terms of Aboriginal culture, I progressed from having some small knowledge, mainly about where to shelve Dreaming stories, to gaining a much deeper understanding of the kinship system, and Aboriginal culture and lifestyle. I also learned in some depth of the history of murder, enslavement, and enforced poverty endured by Aboriginal peoples-including the Stolen Generations-and of how this disadvantage continues. In terms of social work theories, I learned about Worldviews, Standpoint Theory, Whiteness, and Willful Blindness, all of which are still imposing disadvantage on Aboriginal peoples today.

With my newly-gained knowledge of Whiteness, I was able to identify racism in a book being used in primary schools and speak knowledgeably when I raised my concerns with the publisher. I could also see why anyone in the dominant society might miss the indicators of racism, simply due to their Standpoint.

Last year, when Christine was preparing a not-for-profit book for publication, she invited me to write a chapter in it. I initially thought, 'What can a teacher librarian from a primary school write that would be of use in a social work book about reconciliation?' As I thought about it, I realised that I had already addressed reconciliation in quite a few ways, and would do so again by writing the chapter.

The section below about SCIS is an excerpt from my chapter. SCIS has been years ahead of other organisations in addressing the needs of Indigenous peoples. For example, where are your Dreaming books shelved? Do you use SCIS and thus use Dewey number 298? Now go down the street to your public library. You will most likely find the Dreaming stories shelved at 398.2.

When I noticed that the National Library of Australia was still using 398.2 as late as November last year, I contacted them and built a case for re-cataloguing Dreaming stories as religious stories rather than fairy tales. They said I had a strong argument and they were prompt to act. From now on (since they can't do retrospective changes), all Dreaming stories will be given the Dewey number 299.9215. And that's a win for reconciliation! 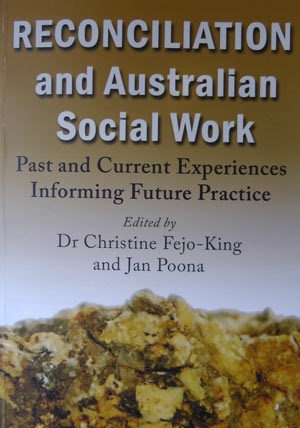 Dreaming stories are purchased in their thousands by school libraries and used with school children as part of the curriculum. However, few teacher librarians would do their own cataloguing. Instead, they would look to an authority in the field to do it for them. For many schools, SCIS is the source of the cataloguing record, with teacher librarians uploading each record into their systems and making it available to their students and staff. Teacher librarians, as a matter of course, then teach students the basics of the Dewey Decimal System and what the numbers mean.

For many years, therefore, SCIS has been in a position of great influence over teachers and school children in relation to how Aboriginal and Torres Strait Islander peoples are viewed. Just by use of subject heading words such as 'legends' (Abridged DDC, 2004) or 'folklore' and by use of a Dewey number in 398 rather than 298, cataloguers would be leading children all over Australia to learn that The bat and the crocodile belongs near Goldilocks and the three bears, and is seen as 'folklore' rather than as a religious story. In contrast, use of a number such as 298, and use of subject headings such as 'religion' (Abridged DDC, 2004), would lead people to think differently about that story and could help them to realise the importance of these stories in the lives of the people to whom they belong.

So what has SCIS done in relation to reconciliation? Has this organisation been a help or a hindrance?

For many years, SCIS has been open to suggestions from clients and has had a policy of meeting clients' needs and addressing their concerns. SCIS has been proactive in addressing the needs of Aboriginal and Torres Strait Islander peoples in regard to how information belonging to, or about, Aboriginal and Torres Strait Islander peoples is represented in their cataloguing records, often acting years ahead of other organisations.

In addressing this concern, the South Australian cataloguing agency proposed that the official way of shortening the word 'Aboriginal' should use the first, second and last letters to give the abbreviation 'ABL'. In March 1993, this change was implemented and included in the SCIS standards.

The third way in which SCIS has helped their clients to value and appreciate Aboriginal and Torres Strait Islander peoples, and the role of Dreaming stories in their lives, was in regard to the Dewey number assigned to these stories. SCIS cataloguers use the permanently unassigned number 298 to give emphasis and a shorter notation to materials on the religious beliefs and creation stories of the Australian Aboriginal peoples.

SCIS has helped reconciliation for the last twenty years. All praise to the cataloguers who took seriously the concerns raised and who served their clients by putting in place changes as they saw the need. This has undoubtedly helped Aboriginal and Torres Strait Islander peoples in many schools throughout Australia.

The book in which this chapter is published is suitable only for senior high school students and adults. It is written mostly in narrative style, which makes it readable to a range of people, not just those familiar with social theory. You can order a book by emailing [email protected]. Funds raised from book sales will be used to support retired Aboriginal and Torres Strait Islander social workers.